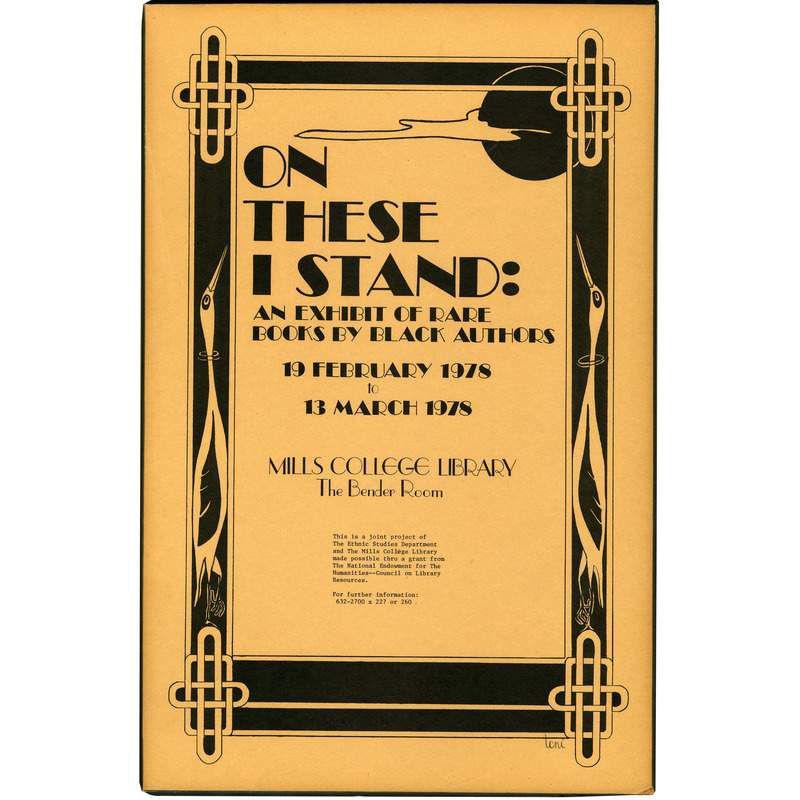 Poster for 1978 exhibit.
Artwork by Toni Belcher.
From the collection of Daphne Muse.

On These I Stand revisits a highly successful exhibit first mounted in 1978 by former Mills faculty member Daphne Muse. The exhibit samples a select few rare black books and collectibles, primarily published in the United States during the past two centuries. The 2014 version of the exhibit featured books and other materials from the collections of Daphne Muse and the F. W. Olin Library at Mills College and was on display in the Library (October 27-December 18, 2014). Although it does not reflect the depth and breadth of the holdings in the F. W. Olin Library or the Daphne P. Muse Collection, the exhibit allows us to “hear” the voices and witness the elements that comprise some of the bravest and most dynamic women and men whose works remain centrifugal forces in black life and culture.

Filled with rare first editions dating back to the late nineteenth century through the Harlem Renaissance and Black Arts Movement, the exhibit featured works by Zora Neale Hurston, WEB DuBois, Countee Cullen, Langston Hughes and Gwendolyn Brooks were featured. On These I Stand: An Anthology of the Best Poems of Countee Cullen (1947) inspired the title and focus for the exhibit. Frances Harper’s Iola Leroy or Shadows Uplifted (1892) and Narrative of Sojourner Truth (1850) also were included in the 1978 exhibit. With the expertise of Bender Room curator, Lynda Claassen, and the collaboration of the Ethnic Studies Program, the exhibit was mounted. Three Mills College students also contributed to making the exhibit happen: Toni Belcher designed the invitations and promotional materials; Vanessa Sawyer assisted in marketing the exhibit; and Harriet Lewis was the research assistant. Funding for the 1978 exhibit was provided by the National Endowment for the Humanities.

That 1978 exhibit became a field trip destination for high school students, and was featured on ABC News and National Public Radio and in the San Francisco Examiner and the San Francisco Chronicle. It also brought out a host of award-winning writers and scholars including Dr. Barbara Christian, novelist Ishmael Reed, novelist and poet Alice Walker, archival librarian Rosalind Goddard, and biographer Dr. Arnold Rampersad. Word of mouth and the literary drum travelled thousands of miles resulting in Harlem Renaissance author William Attaway attending the opening. His novel Let Me Breathe Thunder (1939) was one of the titles selected for inclusion in the exhibit.

As "the warmth of other suns" continued to cast piercing rays across our lives, writers, artists, scholars, and historians continue to fill vessels of knowledge to the brim with our heart-breaking histories, illuminating stories and bold legacies. The 2014 edition of the exhibit reached deep into the global community, bringing architects, writers, journalists, activists, scholars, and students from London, Paris, Amsterdam, Los Angeles, New York and Oakland.

"Daphne continues to give power to the political and literary voices from across the African Diaspora. Seeing the photographs of Dr. King and Langston Hughes at Mills was especially moving" - David Adjaye, Architect, National Museum of African American History and Culture, Washington, DC. 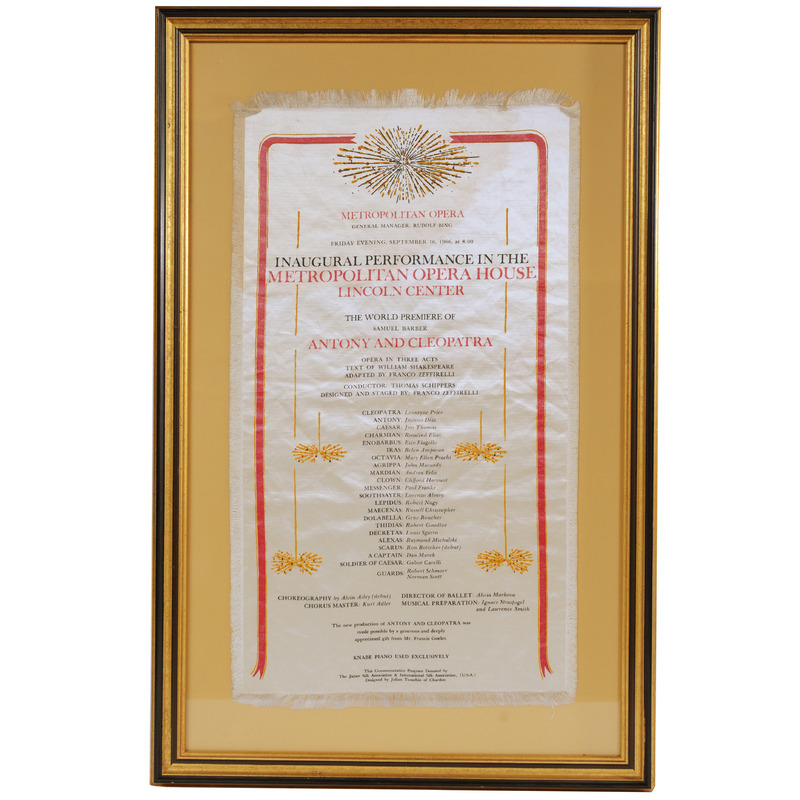 Commemorative program for the premiere of Samuel Barber’s Antony and Cleopatra featuring Leontyne Price as Cleopatra. September 16, 1966.
From the collection of Daphne Muse.

"Something was forged in me early on that pointed me in the direction of collecting our intellectual power. One of the very first documents to enter my collection was given to me by my father. In his role as a private butler for wealthy families, politicians and diplomats in Washington D.C., my father worked for Oatsie Lieter, a woman who was a patron of the arts and supporter of world-renowned Leontyne Price. In 1966, Ms. Price gave him a copy of the exquisite program printed on silk for the Inaugural Performance in the Metropolitan Opera House in New York City's Lincoln Center of the World Premiere of Samuel Barber's Antony and Cleopatra. Price played Cleopatra and it was Alvin Ailey’s debut as a choreographer" - Daphne Muse.

Both the 1978 and 2014 exhibits had tremendous impact on Mills students, faculty, staff, and alumnae. In the November 13, 2014 edition of The Campanil (Mills College's student newspaper) writer Grace Forrest notes the sentiments of Mills senior Sharon Robinson, "It is my history," Robinson said. "It is incredible that we have this here. It is one of those things that you want to savor."

From the presentation copy of Harriet Jacobs's Incidents in the Life of a Slave Girl inscribed by abolitionist William Lloyd Garrison and Tupac Shakur’s The Rose That Grew From Concrete to ORDER GRANTING BAIL—THE PEOPLE OF THE STATE OF CALIFORNIA, Plaintiff, vs. ANGELA Y. DAVIS, Defendant, we hope in this digital version of the collection, you will indeed savor the strides towards freedom, remarkable history, and creativity in every book, photograph, and piece of ephemera included.

Unless otherwise noted, the books and ephemera in this exhibit are from the F. W. Olin Library Collection.
Exhibition text by Daphne Muse.